Mass Appeal Partners with Fotografiska for Major New Exhibition- Hip Hop:  Conscious, Unconscious
Entertainment company Mass Appeal is partnering with Fotografiska New York to create a new exhibition that traces hip-hop’s origins—starting in the Bronx in 1973, as a social movement by-and-for the local community of African, Latino, and  Caribbean Americans—to the worldwide phenomenon it has become 50 years later. Hip Hop: Conscious, Unconscious amplifies the individual creatives involved in the movement while surveying interwoven focus areas such as the set of women  who trailblazed amid hip-hop’s male-dominated environment; hip-hop’s regional and stylistic diversification; and the turning  point when hip-hop became a billion-dollar industry that continues to mint global household names.  Hip Hop: Conscious, Unconscious adds to Mass Appeal’s Hip Hop 50 cross-platform initiative – a manifestation of the company’s commitment to celebrating the culture in the most authentic and globally impactful way possible. The exhibition, which was  created in partnership with Mass Appeal and Chase Marriott Bonvoy, will debut at Fotografiska New York before traveling to  several of Fotografiska’s international locations including Fotografiska Stockholm and Fotografiska Berlin.
“It’s easy to forget that there was a time before hip-hop was an industry and before it made money,” said Sacha Jenkins,  exhibition co-curator and Chief Creative Officer  of Mass Appeal. “It wasn’t conscious of itself. It was just existing with young people living their lives, dressing as they did, trying to entertain themselves with limited resources and creating an aesthetic that registered amongst themselves. It wasn’t for the world; it was for a very specific community. Then there was an exponentially  paced transition where hip-hop culture became a conscious of itself as an incredibly lucrative global export. The exhibition’s lifeblood is the period before hip-hop knew what it was.”
The exhibition brings audiences through five decades of history, culminating in recent imagery of the biggest names working in hip-hop today. The show, which features archival ephemera to augment the contextualization of its photography, is principally laid out by chronology and geography. Focus areas include but are not limited to the early years, East Coast, West Coast, the South, and the newer wave of artists who have emerged since the mid-aughts.

“We made a thoughtful effort to have the presence of women accurately represented, not overtly singling them out in any way,” said Sally Berman, the exhibition’s co-curator, who among other roles has helmed photo direction for Mass Appeal and XXL. “You’ll turn a corner and there will be a stunning portrait of Eve or a rare and intimate shot of Lil’ Kim that most visitors won’t have seen before. There are far fewer women than men in hip-hop, but the ones that made their mark have an electrifying presence—just like the effect of their portraits interspersed throughout the show.”
Alongside portraiture of formative names such as DJ Kool Herc, Afrika Bambaataa, and Grandmaster Flash, documentary images of the larger cultural climate (such as the Savage Skulls street gang, graffiti writers, and block parties) capture the zeitgeist of the Bronx that permeated as the first hip-hop artists innovated the musical style itself. Examples of bodies of work in the show include Jean-Pierre Laffont’s oeuvre of early-1970s Bronx street culture, with a focus on the Savage Skulls; Henry Chalfont’s early- 1980s images of Brooklyn, Bronx, Queens, and Downtown Manhattan, with a focus on graffiti writers, breakdancing, block parties, and youthful shenanigans; and Janette Beckman’s late-1980s to early-1990s street-style portraits of hip-hop’s living legends. 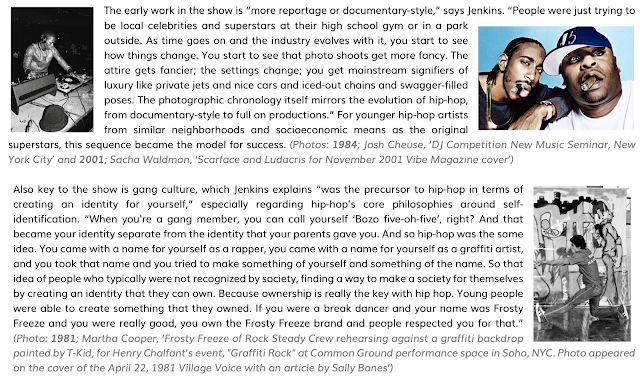 The subject matter of Hip-Hop: Conscious, Unconscious spans the “four elements of hip-hop” (rapping, DJing, breakdancing,  and graffiti) and several debated “fifth elements” including fashion and beatboxing, The exhibition brings audiences through  five decades of history, culminating in recent imagery of the biggest names working in hip-hop today. In addition to dozens of  vibrant images of anonymous subjects engaged in the grassroots hip-hop culture of the 1970s and 1980s, solo portraits and  group photos on view in the exhibition include a wide array of Hip Hop’s talent since 1973.
Alongside group photos, individual portraits are often placed in thoughtful proximity that draws new connections and nodes of  reflection; Missy Elliott and Pharrell Williams, for instance, went to the same high school in Virginia several years apart, and therefore experienced similar formative influences despite not knowing each other at the time. Artists in the exhibition include hip-hop’s earliest  documentarians of the 1970s to younger photographers of hip-hop’s next generation.
Jenkins is sure to emphasize that hip-hop has a culture – which is very much alive and flourishing – and a commercial industry  that is independent of the spirit of the culture. “50 years later, hip-hop culture is something that’s still going that people around  the world can relate to as a form of expression. I mean, break dancing in Korea is huge. People don’t break dance in South Bronx  anymore, but in Korea it’s a big thing. Different parts of the culture took shape in different places around the world, and it’s a  beautiful thing.”
The partnership is the latest announcement surrounding Mass Appeal’s #HipHop50 initiative. In July, Mass Appeal kicked off its Hip Hop 50: The Soundtrack with DJ Premier: Hip Hop 50 Volume 1 (listen HERE). Produced by the legendary DJ Premier, the 5-track project celebrates the sounds of one of Hip Hop’s most prolific producers and includes all-new, original music from Nas, Lil Wayne, Run The Jewels, Joey Bada$$, Remy Ma, Rapsody and Slick Rick. Mass Appeal also recently announced its partnership with Live Nation Urban to produce live event programming. From Park Jams to Festival stages this partnership will create moments that will bring together the voices that turned Hip Hop into a way of life. Additionally, Mass Appeal has its #HipHop50 premium content partnership with Paramount + / Showtime, which has aired documentaries such as: YOU’RE WATCHING VIDEO MUSIC BOX, CYPRESS HILL: INSANE IN THE BRAIN, SUPREME TEAM and more.
As the Fotografiska  partnership is the latest component of the #HipHop50 campaign, it will tie together this major cross-platform initiative by celebrating, acknowledging, and recognizing Hip Hop as not only a genre but a movement that has impacted the global community. A portion of all #HipHop50 proceeds will be donated to the various charitable organizations, including, the Universal Hip Hop Museum set to open its doors in 2024.
Hip-Hop: Conscious, Unconscious at Fotografiska New York was created in partnership with Mass Appeal and is co curated by Sacha Jenkins (Chief Creative Officer, Mass Appeal) and Sally Berman (Visuals Director, Hearst; formerly  Director of Photography, Mass Appeal). In-house support comes from Amanda Hajjar (Director of Exhibitions,  Fotografiska New York); Meredith Breech (Exhibitions Manager, Fotografiska New York); Johan Vikner (Director of  Global Exhibitions, Fotografiska) and Pauline Benthede (VP Global Exhibitions, Fotografiska).