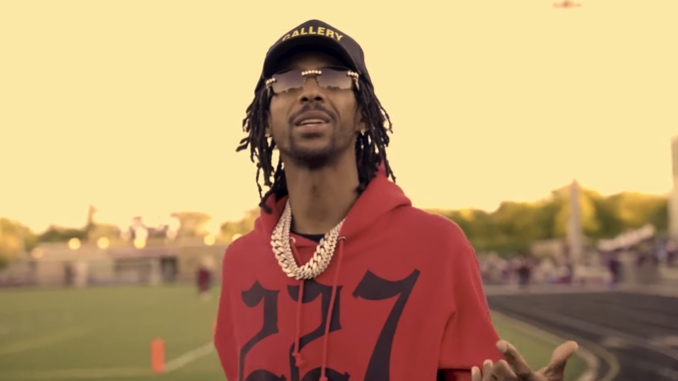 Hip-hop’s premium hustler keeps busy by dropping off another collaborative offering, expanding his artistry further into the unknown.

Its been a hell of a year for rapper Boldy James. The Detroit-bred rapper has spent all of 2022 dropping project after project, making sure his presence in the culture is felt. This year has seen Bo Jack reaching out of his usual circle for beats, working with producers from every corner of the underground. Immediately after his piece with Nicholas Craven hit the streets, Boldy decided to go back to back with underground titan, Futurewave, who has also kept busy with three offerings of his own released this year. Together the two present a masterclass of hip-hop music with their latest record, bringing lyrics and distinct production back to the forefront of the genre.

Mr. Ten08 shows Boldy opening up another lane in his style, adding another layer of depth to his claustrophobic rhymes and free-flowing schemes.

I think I speak for everybody when I say nobody expected Boldy to deliver another project immediately after his Craven-assisted offering, Fair Exchange No Robbery, dropped last month. Ever since the Detroit heavyweight caught his second wind working with The Alchemist, Boldy has been hard at work, making sure he makes the most out of this period of rejuvenation. This time around, Boldy brings Futurewave into the picture, molding a new canvas out of the beatsmith’s obscure production style.

From beginning to end, Boldy raps his ass off, dropping bombshells of bars filled with rugged street credentials, flashy culture references and blunt life gems. The material isn’t too far off from what we’ve previously received from Boldy, content wise, but his techniques continue to get sharper with each record he delivers. Though the lines are keen, Boldy’s rhymes are closely compact, adding strength with each blow delivered to the beat. The meticulous technique is most apparent in the opening lines of the project’s lead single, “Flag on the Play”, rapping the lines: (“They say you better safe than sorry. don’t get caught without it / I say you better late than never in my darkest hour”). While it doesn’t necessarily rhyme, the manner in which Boldy spits his lines open doors for slick lines like this to slide while flowing perfectly with the beat.

Speaking of which, Futurewave does a phenomenal job in keeping the production style diverse. The projected sound for the album’s base ranges across different realms, allowing Boldy’s flow to continuously expand. For example, the haunting tenors present in “Disco Fever” causes Boldy to bring a paced approached to the track while the jazzier tones of “Jam Master J” compact the rhymes and bring them up to speed, vastly varying from his dreary, monotonous flow. Even with the exception of the dynamics that the vocals bring to the track, each beat that Futurewave lays is remarkable and could easily work in regards to an instrumental album. Boldy’s worked with many elite producers, but his work with Futurewave easily stands out among his previous collaborations.

Both Boldy and Futurewave individually elevated their craft to the next level with Mr. Ten08, reaching new heights with lyricism and production in such a short period of time. The 30-minute bar fest displays some of the best efforts from both artists as they collide over a fresh canvas; and while, the record doesn’t necessarily wield a solid concept, the loose nature of record is the main appeal for the record. Listeners are able to see the diversity that the pair exercise throughout the record, adding more to the barebones style of hip-hop that the duo helps represent; and that’s classifies the greatness of this project

The masterclass that Boldy James and Futurewave put on is not one that should go overlooked; the underground dwellers made a fantastic record, slotting another gem into each other’s catalog. As the nominees for the year’s most active hip-hop artists begin to reel in, Mr. Ten08 should serve as a reminder to not brush off the pair’s position in these year-end and decade defining discussions.