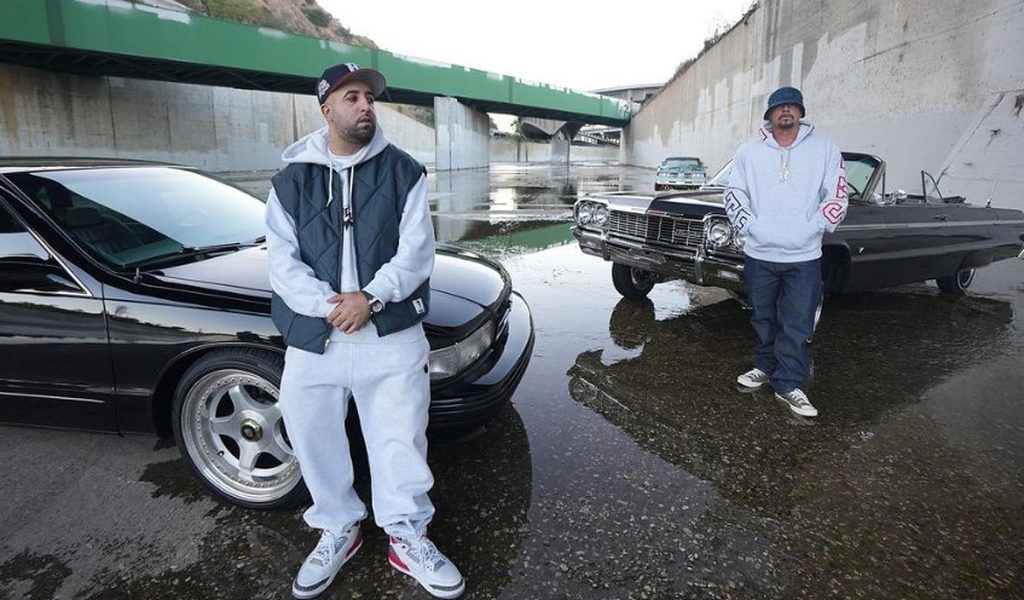 LA icons, Jay Worthy and DJ Muggs, take it upon themselves to reinstill the organic West Coast sound back into the area’s airwaves on their latest collaborative effort.

A collaboration that was bound to happen, the Vancouver-born and Compton-bred, Jay Worthy, has been making his rounds over the past few years, working with every producer that compliments his distinctly dreary style. However, there’s one collaboration that the LA rep has kept in mind since the beginning: a venture with the legendary DJ Muggs. Together, the two have created a tribute to the golden age of West Coast hip-hop, shrouded in the same dark, yet laxed atmosphere of the time.

What They Hittin 4 takes listeners back to the days of lowriders and gangbanging, highlighting the darker undertones present throughout the era.

Jay Worthy and DJ Muggs are two sides of the same coin in their respective eras: meticulous when it comes to their artistry and unapologetically representative of their underground status. The pair have definitely made their proper marks in the dwelling realm, equally assisting in the revival of an organic West Coast sound that existed before the funk-infused synths of the mid to late-90’s. With an original architect of the hazy and dark ambience of the early 90’s on standby, Jay Worthy proves he’s cut from a different cloth and truly lives the authentic Los Angeles lifestyle portrayed across these mediums.

As for the vocals that P Worthy provides, the formula remains intact: a one-take styled approach that captures the emotions being felt in the moment. The pimp-postured emcee is known for dreary rhymes of day-to-day activities and local name drops, but with a perfectionist like Muggs behind the boards, Worthy takes the chance to branch out of his comfort zone. The experimentation bug bites the album with a subtle effect, showing its symptoms thru records like “Thuggin (Psychedelic Ism)” and “In New York” which exhibit a heavy use of harmonies. However, the album does also yield some predictable tracks to keep listeners enagaged, specifically “The Wine Connoisseur” and “I Don’t Wanna Rap” which are the textbook Muggs and Worthy records that fans anticipate (i.e. street edged rhymes accompanied by a head-nodding instrumental). For the most part, Worthy works his magic over the records, radiating the same carefree ignorance as he always does.

On the other end of the boards, the legendary DJ Muggs lays the production throughout the entire project, assisting in the formation of the record’s concise structure. Stylistically, Muggs keeps the sound consistent in accord to his catalog’s repertoire, molding the same gloomy sound associated with his career. As always, the Soul Assassin elevates his proper production, inducting the use of jazz samples that play into the dark undertones of the record. Heavy baselines and murky samples provide the anxious feel as Worthy gives listeners a look into the authentic Los Angeles experience of the 90’s. The production’s assistance in matching the sinister tone plays a major role in the project’s mission statement of replicating the organic feeling of the time.

What They Hittin 4 does a great job of creating a time capsule for its listeners. DJ Muggs and Jay Worthy both did a great job of setting the tone and sticking with the dark ambience of the record. For example, the MC Eiht-assisted, “A-Wax & O-Dog” serves as a tribute to the nuances of “Menace II Society”, sounding like an exact replica of a soundtrack loosie. Though the project prides itself in its roots, certain aspects of experimentation tend to derail the experience. “Duccky’s Home” sheds light on Worthy’s ally whose fresh out of prison, but in a two-minute accapella freestyle that throws off the pacing of the project (can’t lie, it was still a good freestyle). In addition, “In New York” serves as one of the iffier experimental stints; a ghetto musical with lots of charm but not the right placement. Either way, you can’t help but commend the two for stepping outside of the box; some things didn’t work as well as other, but at the very core of the record, Muggs and Worthy still got busy.

Even with its uncertain qualities, What They Hittin 4 is a great experience that helps bring the West Coast culture back to its roots. The minor flaws within the record still come with a positive payoff that adds to the image being portrayed throughout the record. Worthy and Muggs put up a solid effort, managing to stand out in its own right within each artist’s lengthy catalogs. What They Hittin 4 still is deserving of a listen, especially if you’re looking for an authentic West Coast experience in a record.