The Greeting Committee’s headline tour coming to Toronto!
Last month, staple of the indie world The Greeting Committee kicked off their headline To Feel Alright Again Tour. Beginning with a sold out underplay in their home town of Kansas City, the band set out for the rest of 2022 with support from Aidan Bissett and WILLIS. A majority of the show dates are already sold out or have low ticket warnings. The Greeting Committee are back in their natural habitat – on stages across the country wrapping fans in the communal embrace of live music. All upcoming tour dates are available here and below.
On November 4, the band released “Hopscotch,” their first single since the release of their critically acclaimed deluxe album Dandelion earlier this year. Met with praise from the likes of V Magazine and DORK, along with support from Apple Music’s New in Pop, New in Indie, Breaking Alternative, and New in Alternative playlists, as well as Amazon’s Fresh Indie playlist, this release saw the band feeling the most themselves they have felt in years – apropos for the new era they are entering.  Fans can expect more new music very soon! 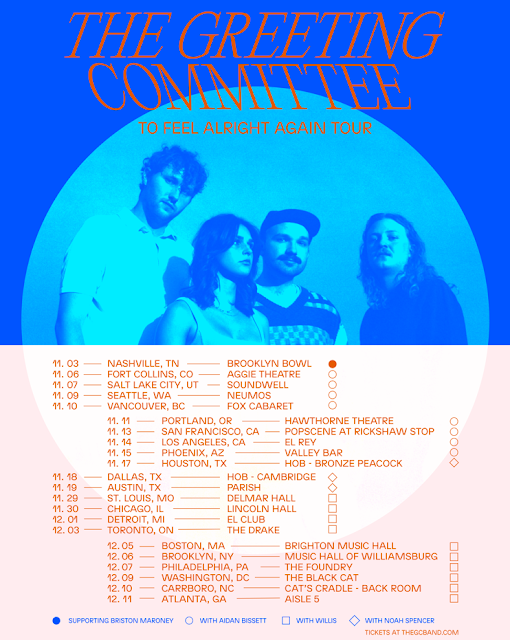 ABOUT THE GREETING COMMITTEE
Comprised of Addie Sartino and Pierce Turcotte, joined by Noah Spencer and Micah Ritchie, the spirit of purposeful sharing has served as something of a lifeline for Kansas City band The Greeting Committee. From the sense of community that surrounds their live shows to the subject matter of their music, the band has created a warm world where all are welcome to shed the weight of living and simply experience a moment together.
After making their Harvest Records debut with the Meeting People Is Easy EP in 2017 and the subsequent release of This Is It, the band spent much of the years to follow on the road, with sold-out headline shows in major markets such as Chicago, Austin, New York, Los Angeles and San Francisco. To date, they’ve toured with the likes of Bombay Bicycle Club, Tennis, Hippo Campus and Rainbow Kitten Surprise, and taken the stage at leading festivals like Lollapalooza and SXSW. Additionally, the band delivered the I’m Afraid I’m Not Angry EP in late 2019 and appeared in Netflix’s To All the Boys: Always and Forever in 2021.
The band’s sophomore album Dandelion, a detailed portrait of a life thrown into freefall and the journey back to self-possession, was released in 2021 via Harvest/Capitol Records. The result was a raw and revelatory body of work, that cemented the band as one of the frontrunners of the indie genre. Earlier this year, Dandelion was given a deluxe treatment which included tracks with Briston Maroney and Tune-Yards, as well as a cover of MGMT’s iconic anthem “Kids.”
In the coming months, the band will be touring across North America on the To Feel Alright Again Tour, kicking off with an underplay in their hometown of Kansas City and then moving coast to coast. All the while, The Greeting Committee are currently working on their next project.

For more information on The Greeting Committee, please visit: